This is testament to the efforts of everyone at the Up and Under Group.  I think we should all be very proud of our success. 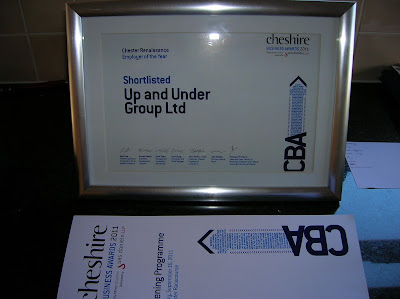 Below are a few comments from the organisers, sponsors and presenters:

Friday night began with an introduction from Rob Irvine, publishing director Trinity Mirror North Wales and Cheshire, who described the awards as growing in importance every year.

“It was a tough but rewarding job for the judges to draw up a shortlist and pick the winners,” he said.

“The awards represent the pick of the crop of Cheshire talent who are helping to get Britain back on track.

“Tonight you will hear examples of people who have launched start up companies, developed small businesses into bigger organisations, done sterling work in their communities and helped staff to reach their full potential.”


Returning as host for the occasion was Granada and ITN news presenter Lucy Meacock, a former Chester Chronicle journalist with a life long commitment to Cheshire and its business community.

Paying tribute to the businesses represented at the event, she said: “You create the jobs so that people can enjoy the opportunity to stay in this wonderful county and start their careers here.”