← ICE Awards Dinner
Shrove Tuesday at Up and Under →

The Up and Under Foundation recently presented a cheque for £600 to the 10th SW Cheshire, Haslington Scout Group. The money will be used to purchase tracking devices to allow groups of youngsters to undertake hikes with the added security that the leaders know exactly where they are if they get lost. Members of the group will be training for the Cheshire Hike, an annual event where youngsters cover distances of up to 50km over a weekend, carrying camping equipment. Andy Fewtrell, Up and Under Group MD, spoke fondly of his days in the Scouts and related how he still regularly uses many of the skills learned in the organisation, such as navigation, fire lighting and motor mechanics. 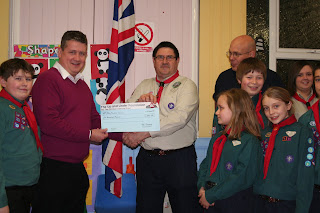 The Up and Under Foundation, funded largely by the Up and Under Group, a local civil engineering and building group, manages two funds, the Eric Swan Bursary that covers the costs of youngsters attending courses at the Conway (Menai or Nelson to older readers) Centre and the Tom Dootson Memorial Fund, which aims to support Scouting activities.

The cheque was presented by Alastair Dootson, Tom’s son, a Surveyor in private practice from Tarporley. Tom, a long time supporter of youth activities near his home on the Isle of Man, was the inventor of the modern retail park, along with Peter Jevans and John Whittaker of Peel Holdings (Property Week, 2012), when they created the first standalone retail warehouse in Bury in 1981. He later went on to develop sites as far afield as Warsaw in Poland.

The Up and Under Group, now in its 25th year, will be seeking to raise further funds via a levy on company turnover during 2012. They are therefore hoping for a successful year providing rope access and confined spaces based consultancy and construction services. The newest addition to the Group, Zenith Interior Contracts, a specialist in the installation of office partitions and suspended ceilings, has several local projects ongoing, especially with it’s latest product offering hygienic interior cladding.

Staff and clients will also be undertaking a range of activities to raise further funds to support less well-off youngsters in the area. In the past, this has taken the form of marathon running, bike rides, mountain climbing and even cake baking. We would welcome any support from local businesses, with whom we are happy to discuss the benefits of deeper employee involvement resulting from active CSR programmes. The Up and Under Group, Employer of the Year locally for the past two years, are committed to being a positive force in their community.

This entry was posted in Blog.
← ICE Awards Dinner
Shrove Tuesday at Up and Under →