← Training Award Runner Up
Up and Under Group Asset Management Success →

Earlier in the week we were runner up in the Sentinel Business awards in the Training Excellence category, but last night things got a lot better with The Up and under Group winning the ‘Mornflake Oats Award for Innovation’ at the High Sheriff’s Awards for Enterprise. 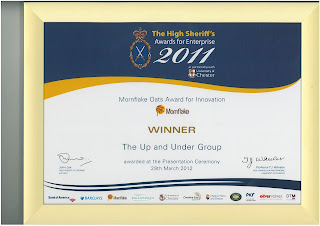 Making it even sweeter the certificate was accompanied by a cheque that just about equaled our annual turnover in our first year of operation, 25 years ago, in 1987!

In other news Rob Hughes completed the Cheshire Cat Cyclosportive on Sunday (102 miles) and made it up Mow Cop killer mile.

All in all a pretty good week

This entry was posted in Awards, sport, up and under group.
← Training Award Runner Up
Up and Under Group Asset Management Success →