Time to go!  The starter calls your name, you push up onto the start hill, check you’re in the right gear, and clear your goggles.

The second official radios your number to the timing staff at the bottom.

So begins the Up and Under sponsored teams first event of the prestigious 2014 Pearce Cycles Down Hill series. 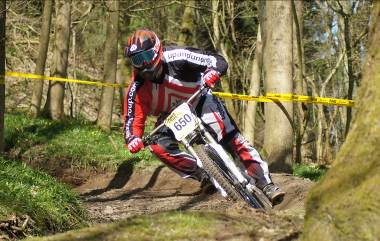 Rob going hard through the corners

Rob was out first based on the previous year’s seeding and put in a steady ‘safe’ run going through the speed trap at 36.3km/h (10th Fastest in category) with a 53.4sec split putting him in 34th then crossing the finish line with 2:31.4 29th place.

After the first runs times were incredibly tight, so any small mistake could drop you over 5 places. With the sun was now blazing, it was a safe assumption that  the 2nd runs would be faster.

On the Second run Rob, up first and disappointed with his first run, was clearly giving it full throttle breaking the speed trap 40.3Km/h, 2nd fastest s in class!! The split time was better as 52.5 secs. but a lack of focus through the bottom section meant he wasn’t able to capitalise and crossed the line 2:30.1, dropping to 31stth place.

Tom had decided to throw everything at the second run with the confidence from the first run position. This approach meant things got scrappy quickly and he lost it straight after the first split with a  big ‘tankslapper’ ending with his left kneepad round his ankle with three quarters of the track to go. The rest of the run was all over the place trying to get the time back and ended up crossing the line 2:26.8, in 20th place. 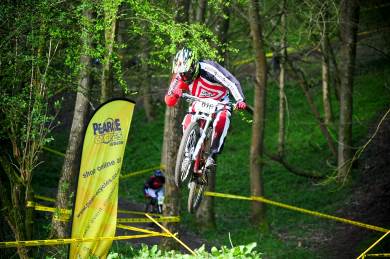 Overall a great weekend and good to know both Rob & Tom are on pace for the next round. Pearce Cycles Round 2 takes place at Rhyd Y Felin (Bala) Wales May 3rd & 4th. Rob and Tom have recently completed an uplift day to practice the track that neither has raced before. The track uses much of last year’s National Champs track and is in a different league to Round 1, being much longer and speeds exceeding 50km/h, plenty of large jumps and steep technical sections. On-board footage at: https://www.youtube.com/watch?v=J74EBgAlb4o&feature=youtu.be&hd=1 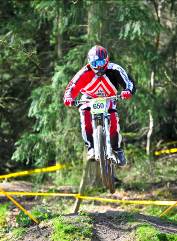 Rob keeping out of the medic’s tent
This entry was posted in Cycling, downhill, staff, up and under group and tagged Pearce Cycles DH.
← CIHT Wales – Pontcysyllte Aqueduct
Safety Update – Safety at Sports Grounds →